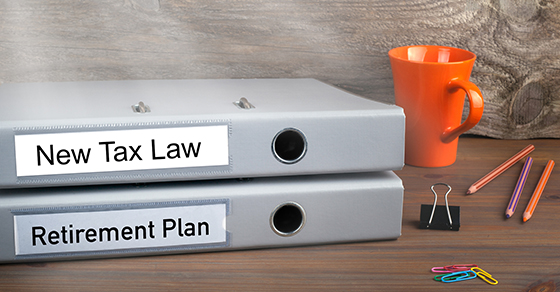 As you’re likely aware, Congress passed and the president signed into law a new tax bill in December. The technical name of the act is rather long and unwieldy, so it’s commonly referred to by an earlier and simpler title: the Tax Cuts and Jobs Act (TCJA). Naturally, most of the TCJA’s provisions have to do with income taxes. But it also impacts retirement benefits.

The new law gives a break to plan participants with outstanding loan balances when they leave their employers. Ordinarily, participants with outstanding loans who fail to make timely payments after separation from an employer are deemed to have received a distribution in the amount of that outstanding balance. Under pre-TCJA law, they could, however, roll that amount (assuming they have sufficient funds available) into an IRA without tax penalty if they do so within 60 days.

Under the TCJA, beginning in 2018, former employees in this situation will have until their tax return filing due date (including extensions) to move funds equal to the outstanding loan balance into an IRA or qualified retirement plan without penalty. They’re given the same opportunity if they’re unable to repay a loan because of the plan’s termination.

This provision may portend additional 401(k) restrictions in years to come. Roth 401(k)s are favored by revenue-seekers in Congress, because the after-tax nature of contributions to Roth plans — IRAs or 401(k)s — enables the federal government to collect more tax revenue in the present, pushing off into the future the drain on tax revenue because of the tax-free nature of Roth withdrawals.

Indeed, the federal government will likely continue to look at changes to retirement plans as a means of generating revenue. One proposed, but eventually eliminated, provision would have required that all contributions to any defined contribution plan sponsored by the same employer (including mandatory employee contributions to a defined benefit plan) be aggregated when determining whether contributions to a participant’s account satisfy IRC Sec. 415(c) limits. This would have raised $1.7 billion over a 10-year period, the Committee’s staff estimated.

Similarly, Congress considered imposing a low ($2,400) cap on pre-tax 401(k) contributions, requiring the balance of the total $18,000 limit on contributions ($18,500 for 2018) to be made on an after-tax basis. Congress could someday revisit this concept and push employers to convert traditional 401(k) plans to Roth plans.

The TCJA goes far beyond tax rate reductions. Let our firm help your organization fully understand how both its tax liability and employee benefits are affected by the new law.